The author of the prediction in 2014 managed to acquire accurate results because Triple J featured a social share button on their voting page, which posted your votes to your Facebook in text form. The author scraped results from public Facebook posts and aggregated all the votes. They managed to obtain 1.3% (1779 entries) of the expected total vote.

Consequently, voting for the Hottest 100 2014 and 2015 did not contain such a feature. Fortunately, voters still felt the need to share these results with their friends, and taking a screen shot or a photo of their screen and posting to social media was a concrete alternative. Using these images posted to Instagram, I was able to accurately predict the results of Triple J’s Hottest 100 of 2015.

Some Cool Stats Before You Continue

You’ll probably find this article interesting, but if you’re super eager, you can Skip To The Results.

I decided to only target votes that were posted to Instagram, since a high majority of the pictures hashtagged with #hottest100 were in fact votes, and there was a reasonably high volume of them, and most publicly accessible.

I required means to acquire all pictures that had been posted to Instagram. Instagram have an official API, however you are required to have your API app usage approved before it can interface with non-sandbox users. Additionally, Instagram impose a rate limit on non-approved apps, as well as approved apps. I did not have time to waste, and wanted results immediately, so I found an alternative.

Fortunately, Instagram exposes a non-public API through their website ajax loading when you browse to a hashtag. By imitating the web browser with a simple python script using the requests library I managed to download all images from the latest until a cut off date that I specified (the day voting opened).

After scraping the hashtag #hottest100, I expanded my search to #hottest1002015 and #triplejhottest100.

After downloading 7191 images from Instagram, I needed to find an accurate way to filter out the images that were not votes.

I’ve had previous experience with using PIL in Python, so using PIL, I wrote a simple script to sort the photos into 2 categories; photos that appeared white-ish, and photos that were not. 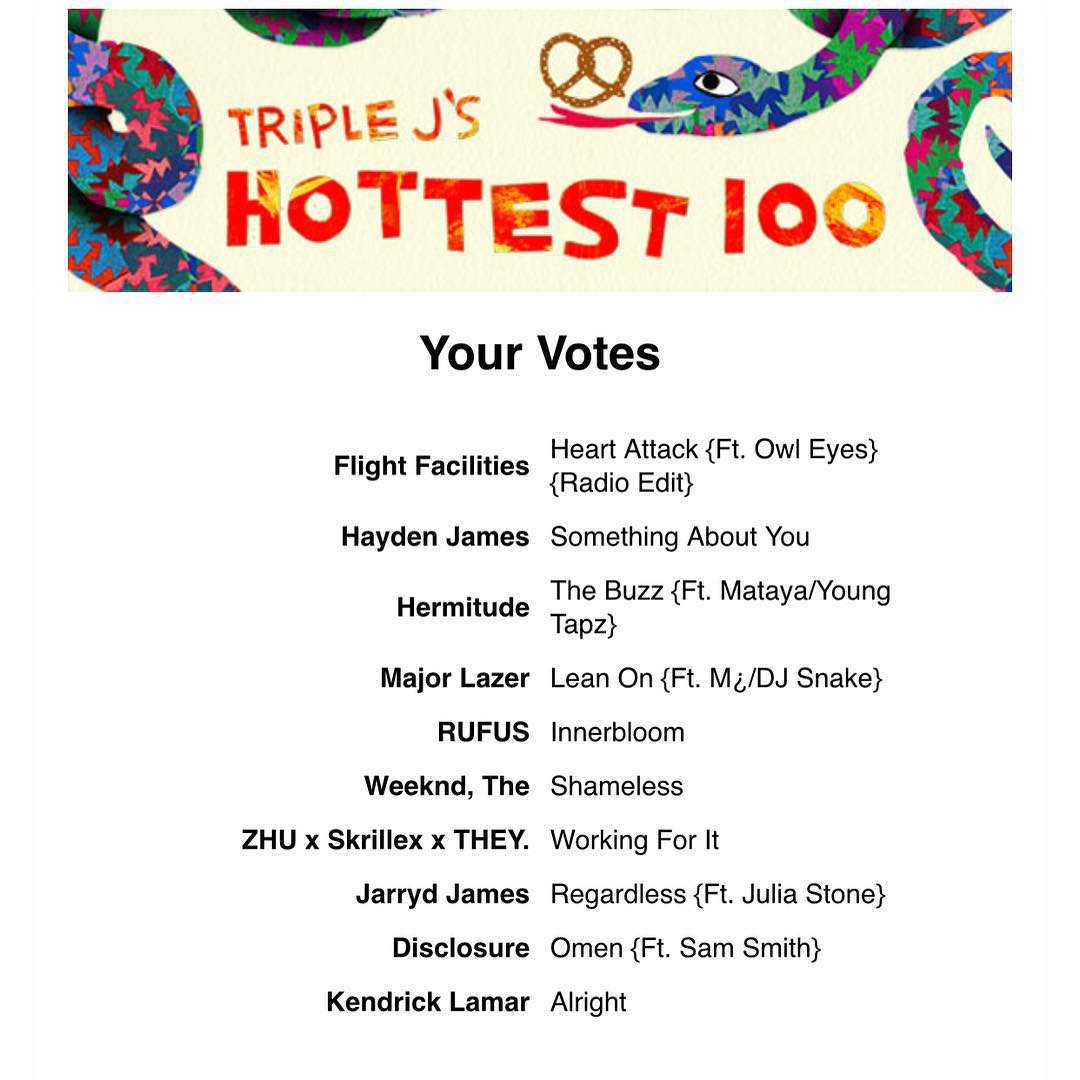 As the image processing and sorting continued, I manually moved false negatives to the positives folder. I calculated about 5% of the non-matching photos were incorrectly classified, however this was due to them being pictures taken of computer screens, similar to the photo below: 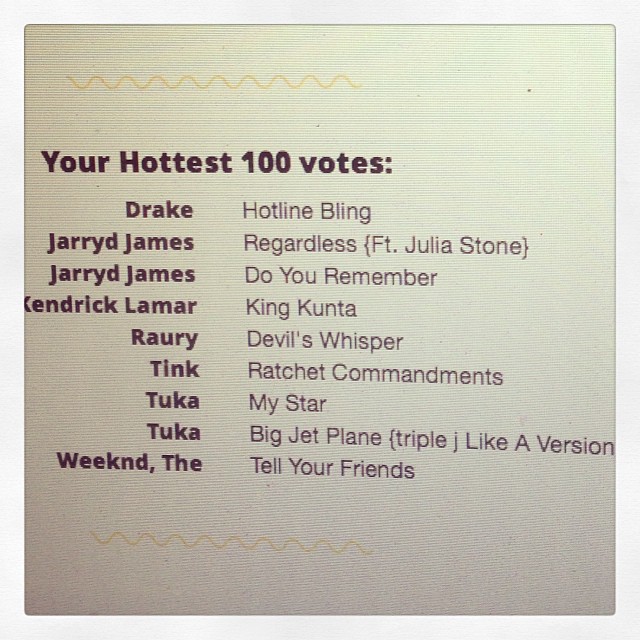 After experimenting on raw photos from Instagram, I found that OCR accuracy was not very accurate. To remediate this, I utilised Imagemagick to flatten image definition to improve text results. 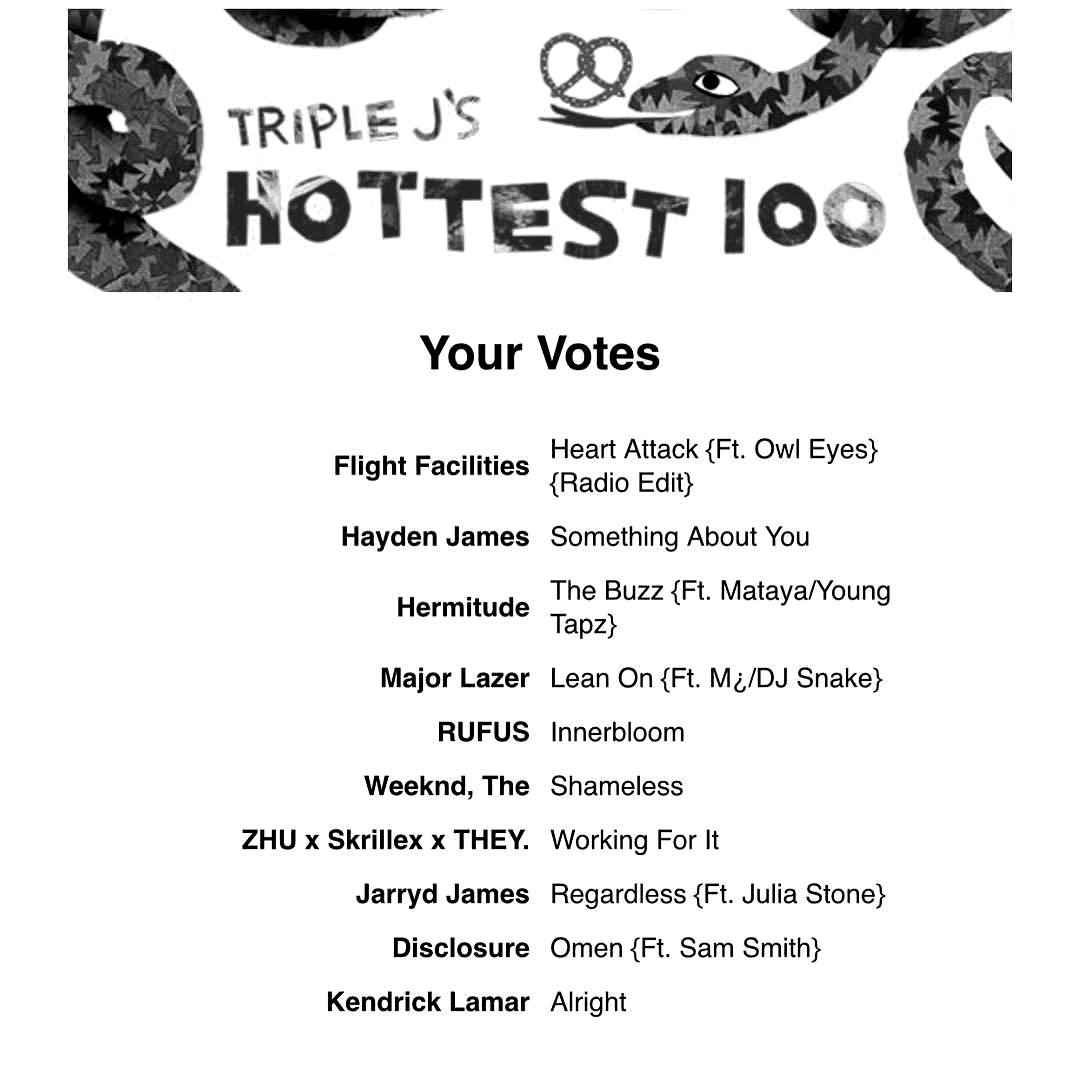 After weeding out the junk, I still needed to turn these images into readable text.

Using Google’s Tesseract library, I slowly processed all the images and extracted the text from them.

Unfortunately, due to the layout of the Hottest 100 voting website the two columns were broken up inconsistently over the results.

Some were processed as:

And others processed as: 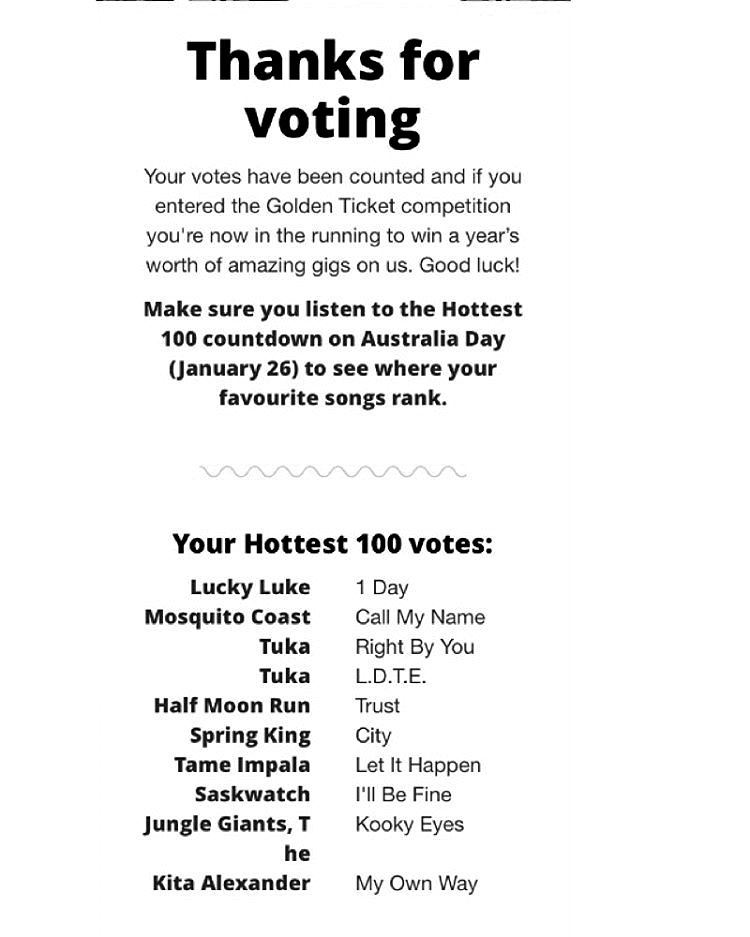 And others just did not process at all, due to resolution, colour, skewing, or simply because they were a photo of a computer screen: 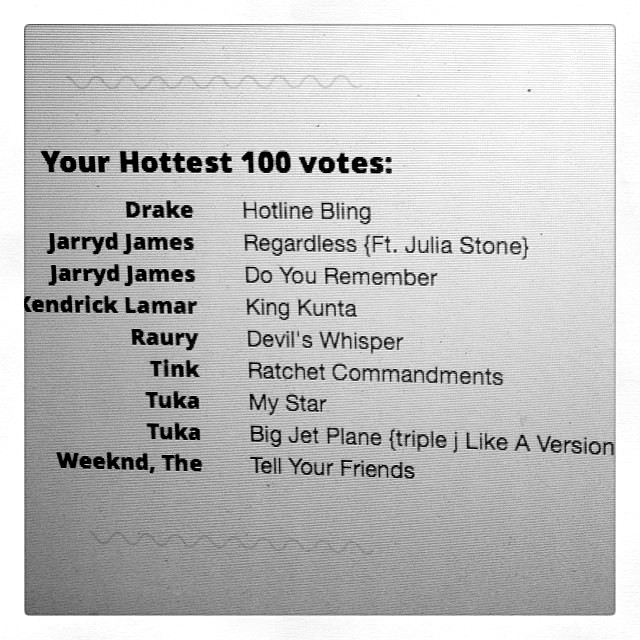 I processed the results line by line, and call these “terms”. These such terms could contain a single song title, a single artist, an artist name with song name, or just junk overhang from a previous line. Initially there were 31062 uncategorised terms.

I processed each term and aggregated number of results for each. This worked really well for songs with short names that were less prone to error, such as Hoops, however did not correctly capture terms where artist name and song name occurred on the same line, or where the OCR library interpreted a few characters incorrectly.

Even with photo enhancements, the OCR accuracy was somewhat subpar for some votes. Some l’s were interpreted as t’s, i’s as l’s, etc. Additionally, the longer the name of the song, the more prone to error it was.

A technique that can be used to fix these spelling errors of single/multi character errors is the Levenshtein algorithm for edit distance. Using this algorithm, we can compare 2 strings and determine how many edits need to be made to make the strings equal each other.

In order to perform this kind of matching, we needed an accurate list of songs that were released this year, along with a list of artists that released music this year.

To acquire an accurate list of songs released this year, I used Spotify and crawled various playlists from 2015. These included Spotify Charts, Triple J Hitlist, and various other genre-alike playlists.

In the end I ended up with a songs list with 1781 songs, and an artists list with 1229 artists. After the Hottest 100 aired, I compared the results of the countdown to the songs found in my list, and only 6 songs that occurred in the hottest 100 were not in my “truth” list.

During list gathering, I made sure to convert all unicode characters to their ASCII counterparts, so that characters with accents and similar would be matched correctly.

However, we still haven’t aggregated any votes that had spelling errors due to OCR inaccuracies.

Employing the Levenshtein algorithm, we continue to process the unknown terms. I configure matching to allow lenience based on the length of the term - the maximum edits that were allowed was 2/5 * length of term. The process continues:

Some of the results of string matching, providing some reasonably accurate re-matching.

That means we were able to successfully categorize 8785 terms via the Levenshtein distance algorithm!

Quite an improvement, however still not great. Some of the terms there weren’t able to be categorised which caught my attention included:

Paying special attention to The Less | Know The, if I were to add it’s sum to our results, it would have placed 4th, however, the results we already have look reasonably accurate.

After reviewing the method used for analysis, I have identified a few places for improvement that could possibly improve the results.

Some writeups based on my experience during the competition. This was the first time I had ever experimented with corporate pentest style problems, hence why I did not get very far. I do, however, wish to share my experience.

Whilst writing these writeups, I actually stepped through them using the CySCA 2015 challenges, rather than guessing them from the notes I had taken during the competition.

CySCA have yet to release a “CySCA In A Box” yet, so I thought, rather than just making the challenge work just for me, I thought it would be beneficial to create a Vagrant environment so that anyone can get the challenges up and running in no time at all.

Head on over to this repo/page on my github for instructions on getting set up.

If you’ve got any questions, feel free to tweet me: @nickw444

It’s no coincidence this challenge is called Terminal Situation, we have a terminal sitting right in front of us.

As an executive, we notice we’ve got some additional functionality. We notice another menu item “IT Support” and the “Executive Board” option on the home page.

We need to gain access to the CVO (Angelina’s) account. In order to do this, we most likely will need to steal a cookie. We take a look in the leave details section and put in a leave request to see if it’s XSS protected. Additionally, we notice that the session cookie on this website is not HTTPOnly. Time to steal.

The browser will prevent javascript accessing HTTPOnly cookies, hence, if it was HTTP Only, we would be looking in the wrong place.

We do the naive thing and just put <h1>Hello</h1> in. However, the ticker spits out WARNING: XSS detected! You have been reported.. Additionally, it appears the XSS is stripped client side too.